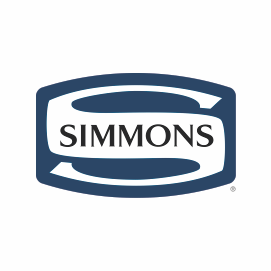 The Simmons Bedding Company is an American major manufacturer of mattresses and related bedding products, based in Atlanta, Georgia. The company was founded in 1870, and is one of the oldest companies of its kind in the United States. Simmons’ flagship brand is Beautyrest. In addition to operating 18 manufacturing facilities in the United States and Puerto Rico, the company licenses its products internationally. According to a Simmons press release, net sales for 2005 were $855 million, and its revenue was $1.13 billion in 2007 and $1.228 billion in 2013.[

In 1876, Simmons became the first manufacturer to mass-produce woven wire mattresses. This process helped the company produce beds faster and cheaper, and by 1889, with the introduction of spiral coil springs into woven mattresses, Simmons’ mattress prices dropped from $12 to 95 cents, making mattresses more widely affordable.[6] The business was incorporated in 1884 as the Northwestern Wire Mattress Company, adopting Simmons Manufacturing Company as its name in 1889. According to company records, by 1891 it was the largest company “of its kind in the world”.[5]